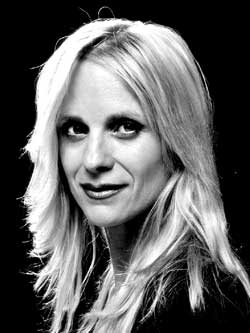 As a four-year old Karin was already entertaining her parents, uncles and aunts by immediately and without fail singing every song she heard on the radio and on television, dancing fervently to the music and in so doing providing everyone within earshot with much amusement. Thus her career path was clear from a very young age.

As an elementary school student, she took ballet and jazz dance lessons on her free afternoons; later she attended the Polgarstrasse Music School in Vienna-Donaustadt to further develop and hone her vocal and musical talents in the Austrian musical metropolis. As the solo singer and frontwoman of the school band “Live-Act” – which at the time was very well known and popular in Vienna – Karin was already dazzling audiences as a teenager under the musical direction of Hubert Waldner (“Hypersax”), building up a base of numerous fans and friends that still accompany her to and support her at her performances to this day, almost regardless of where she is appearing. As a consequence of her dedication and skill, she was invited to make regular guest and support appearances at the Danube Island Festival in Vienna together with giants of the Austrian music scene such as Ostbahn Kurti, Georg Danzer, Jazz-Gitti and Opus. Karin Janda subsequently studied jazz vocals at the American Institute of Music in Vienna, and was regularly hired as a lead singer by various rock, pop and jazz bands, and as a studio vocalist by renowned artists such as A Klana Indianer, Antonia, DJ Ötzi, Glizzi Girlz and many others.

With the dance project “Mysterio” (produced by Stephan Deutsch and Thomas Greisl – Sonic Palms), she also drew attention to herself outside of German-speaking Europe in 2002 and 2003 – even registering international chart success with songs such as “There is a Star” and “Everlasting Love”, which received airplay on Viva2.

At the beginning (starting in 1998), parallel and since 2003 “exclusively”, she now
concentrates full time on the “Abba” theme – and has now appeared on stage and on tour
internationally for more than 11 years in “the role of her life – Agnetha.” Together with vocal partner Dany Reiter (as “Anni-Frid” or “Frida”), she has become the absolute number one in the “ABBA cover show & tribute band” scene through tremendous vocal emotion and unparalleled stage presence – regularly thrilling audiences of thousands in the biggest halls around Europe with the act “THE REAL ABBA tribute”.

Karin Janda is the proud mother of two boys (Jan and Dennis), and is happy to have
achieved a fulfilled life alongside her musical career.